This is the first in a series of interviews I will be posting on my blog. Interview subjects will consist of top Art directors, Photo editors, Fashion editors and Ad agency creatives. The Interviews are conducted with an audience of pro-am photographers in mind and questions will relate almost exclusively to Photography and Photographers.


Brendan and I have collaborated on a few projects together, namely last September's cover of GQ with Bollywood star Hrithik Roshan and the infamous Golden Golf Card shoot at the 2009 GQ Men of the Year Awards. He is currently the Art Director of Vogue India and a brand new dad.


In this interview he shares what it takes to become a Vogue/GQ contributing photographer.


Martin Prihoda: Good to have you on board Brendan, lets start of by ways of introduction. Can you give us a bit of your background in the publishing world?

Brendan: Sure, I'm Australian by birth and started with FHM in Australia before moving to Russia. I had originally moved to Russia as part of the FHM team and wound up working for GQ there. After a few years with GQ Russia, I moved to Mumbai to launch GQ India and am currently the Art Director of Vogue India.

M: I take it you like to travel, how have the transitions been?

B: Well, I guess you could call India my second 'emerging market.' As an art director, its been really interesting learning the local aesthetic and expectations, that's one of the reasons I love to travel. In fact I had never been to either India or Russia before being posted there.

M: For folks out there that might not know, what exactly does an 'Art Director' do?

M: How many photography portfolios do you see in a week?

B: In India we probably average 3 a week but a lot of agencies abroad send through electronic PDF's and that sort of thing. As far as seeing people in the office, physically bringing in books its not very often, but like I said I get a lot of enquiries over email. Actually its becoming more so, photographers in India are beginning to realize that they have to start pitching against foreign photographers, that the work doesn't fall into place as easily as it used to.

M: And would you say that's different in India than say the UK?

B: I think its different because the market isn't as developed yet. There aren't, relatively speaking, as many photographers around. A larger, more established base of photographers exists in the UK and even in Russia. That being said, there's a wide range of talent that does contact us here, from people with almost no fashion experience wanting to shoot a fashion story to photographers who are very experienced and established in this market.

M: Let's shift gears here a bit and talk specifics. What are some of the things you really look for when viewing a photographers portfolio?

B: One of the first things I look for is consistency, particularly if its a photographer I haven't seen or worked with before. There's nothing worse than hiring a photographer based on a few shots in their portfolio and then the shoot becomes a disaster  because they start shooting something completely different. An 'eye for detail' is key as is creativity, of course. One of the big things is use of light and lighting skill. India has some amazing light so I want to know that the photographer can capture and maximize that light. Its important to understand that the photographer is going to have a lot of input into how the shoot turns out so its not only portfolio but what are they like as a person.

M: What are some of the things that turn you off when looking at a portfolio?

B: (laughs) I don't like seeing too much work. You know, everyone has to edit down to their absolute best shots. If its 2010 now, I don't want to see shots from 2000. Also, I don't think its particularly effective to present a book that has a wide range of images; I think its best if photographers stick to a niche when presenting their work. Find out what you do well and stick to that, don't try to be everything to everyone. I think that's a big turn off actually, someone showing me fashion shots, then still life and then some book cover they shot.

M: So if you’re looking at a fashion photographer's work, how many images are enough?

B: I don’t know that you can put an exact number on it, whether its 16 images or 30 images...you have to keep someone intrigued in your work. I think its best to show your portfolio to a range of people, just to get some opinions before you submit, then edit them down. If there’s something there that’s a bit doubtful then take it out. 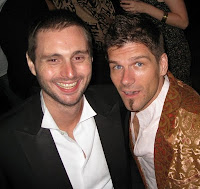 Brendan and Martin at the 2009 GQ India Men of the Year Awards, Mumbai.
Posted by Martin Prihoda at 4:12 AM

Great interview Martin! Indeed the photographers shooting images for the Indian market need to be a bit cautious towards Indian sensibilities.. Most readers in India are opening up to various possibilities of accepting high end designs and experimental artworks, while the population in general is not in tune with what's happening in the industry and might not approve of too many western ideas (proven by the recent week-long ban on FTV India)

I hope people like you get more space to push the boundaries so that newer photographers like me get more leverage to experiment in the near future. Keep rocking.

Great insight! I've been wanting to get into the Indian industry and this helps a lot! Thanks Martin!

Wow, thanks for this wonderful interview. BY the way...what made you interview Brendan? Do you want to tell us that theres lot more than just taking good pictures?