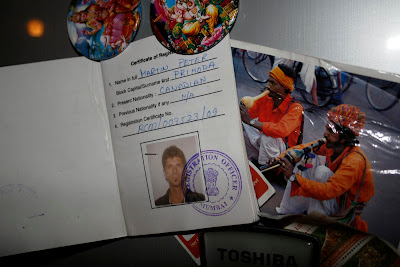 my dear friends, i owe you many apologies.
As i sit here in my 2 BHK (bathroom, hall, kitchen) apartment in the Bandra suburb of Bombay, my beautiful wife cooking lasagna, both of us sipping Indian wine (Sula's Cab shiraz to be exact) I am fully aware that my blog posts have been far and few between, but rest assured there is a reason for this.
the reason is strictly a legal one and to put it bluntly, until a little while ago, well, I wasn't. However I am now armed with an Indian work visa and a residency permit. This means that I am legal to work in this amazingly rich, crazy, insane, beautiful, wealthy, poverty stricken, smelly, friendly, paradoxical country that is India.
I'm working with a great bunch of peeps that run a production company called Bang Bang Films. They've sponsored me and we've worked on some great stuff together, including a commercial for Nokia with the gorgeous Priyanka Chopra.
The opportunity in the 'maximum city' of Bombay is unreal. While everywhere else seems saturated and suffering the pangs of recessionary woe, I'm doing some of the best work I've ever done, here, amongst the 18 million Indian crammed onto a small island city.
Muslims, Christians, Hindus, Jains, Parsis...Bombay is a world unto itself. Like a scorned woman ready to unleash her wrath against herself, the island seeths with fury, passion and worship.
Throngs bow to the elephant god Ganesha while statues erected in raging post colonial hangover dot the crumbling streets and cracked tenements. Pan spit covers the corner masonry of every building and children beg at the windows of shiny Porsches and BMW's. In one breath the stench of rotting sewage mixes with temple incense and in a single glance a stray pariah dog, sick with lice and infestation nips at the spotless golden lining of a flowing sari.
I'm falling in love with this city.
Simply because its everything I am. The sacred and the profane. the filthy and the clean. the saved and the lost. the ambitious and the lazy. the sick and the healthy. the arrogant and the humble. the mother and the father. The alive...and the dead.
I'm sending out a newsletter in the next few weeks; it will highlight all the good stuff so if you haven't, please sign up.
thats all i have for now, but let me leave you with this:
do it, for gods sake. don't give in to your fear, don't give into the rationalizations of your mind, listen to your soul; your soul will guide you, always. leave your safe shore and go explore, bring your kids and wife with you if you have to, bring a friend or two or go by yourself. No one makes it big in their own hometown.
peace
m
Posted by Martin Prihoda at 6:52 AM

Wow is all I can say. Thank you so much for sharing your experiences. It goes beyond photographic and into the transcendental. I look forward to reading more about your adventures in Bombay!

I'm so glad to hear that all is well! I've kept up with your work for quite a while now, and can't wait to see what you've been working on!

Martin
thank you so much for sharing your journey, your experiences and your thoughts, you are a motivator.
Keep enjoying and keep posting, I love seeing how successful and happy you are.
best
Karen

"no one makes it big in their hometown..." 11pm on a Sunday in the city I was born in (Maple Ridge) wondering how to push my 10 years in this business to the next level. Inspiring stuff - thank you for sharing.