There's an interesting paradigm shift when that which you believe encounters the stark reality of how it really is. Such is the case with the Dharavi Slum.
As you may now the above mentioned slum is the largest in Asia and was featured prominently in the overly popular film "Slum Dog Millionaire" (which incidentally most Indians feel is an 'average' film at best). The general perception of the place, at least in my eyes was that of a dismal, economically depressed leper colony made up of dilapidated shanties, beggars, dirty shoe-less children and bad wiring.
Apart from the shoe-less dirty children and bad wiring my pre-conceptions are way off. As we walk though the narrow streets, our trusty guide and friend Rishi at our side, what we find is a little city full of extremely hard working, industrious and talented lower middle class folk. We see women sifting spices, men pulling old wooden carts full of deliciously fresh watermelon. Laughing, bright and curious children surround us at every corner while bakers remove fresh buns from tandoori style ovens. Paprikas dry in the baking sun, while workers stack cinderblocks along the flaking plaster walls.
We scrape through tiny alleyways ducking dangling electrical wire and side stepping oozing gutters. Up a rickety set of steep ladder-like stairs we arrive at a rooftop attic doubling as a tailor's shop and once there sift through and buy enough linen for five tailored shirts and possibly a pair of shorts. Men sit sewing in the crowded room as ancient ceiling fans croak and groan above us, their machines whirling away in the sweat and humidity. At a rate of 15 rupees a shirt, these fellows are working their butts of to earn their wage.
As we walk back we pass chai walas pouring tea, butchers slicing into large chunks of lamb, the smell of blood and guts and incense permeating the air. In a flat bed truck a man throws severed goats heads into a pile while an old woman bakes corn over an open flame in a makeshift barbecue. In a dusty field scores of kids engage in sunset games of cricket and soccer while grandmothers sit chatting, the bottoms of their bright sari's dusting the cobblestone street.
Dharavi exports some of the worlds finest leather and shops line the causeway selling bags and jackets for barnstorm prices. Leather walas chock a block call us into their shops, promising 'special' prices and guarantees of under-selling their neighbors.
Its an amazing place indeed. I think Hollywood would like us to feel sorry for these people, for their 'lot' in life, for their poverty and in many ways its been exploited as that...
but Rishi tells me that there's much more to Dharavi than meets the eye, that if one looks past the initial perception of abject poverty, there is a thriving community at hand here.
Like everything else that is India, there is a much deeper mystery at work, waiting to be discovered by those who choose to look deeper... 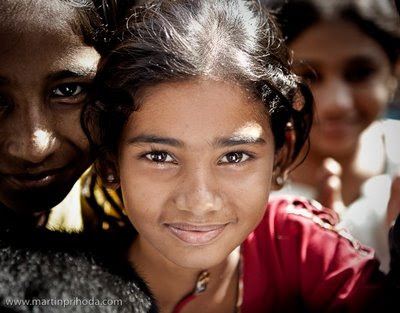 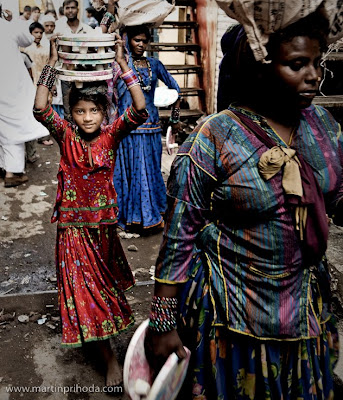 Posted by Martin Prihoda at 8:45 PM

I'm loving the photos from India Martin, their really inspiring for my trip away, I'm loving the stories too, very envious of you right now...

All the best
Phil

Thanks for posting this Martin. I'm looking forward to seeing more of the pictures.

i"m passing by ... after "googling", searching about Dharavi
interesting what i saw in your blog
;)

good work i love it

good work bro i love it