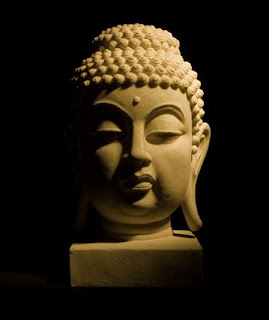 i like the one about the Zen monk who lives outside a poor village.
One day a Zen monk walks into the village and there's great jubilation.
He inquires into what's happening and the villagers tell him that they've acquired a new horse; a symbol of wealth and status at the time. They tell him how great it is that they have this horse and all he does is shrug his shoulders:
"we'll see..."
He comes back a few days later and a group of the villagers have crowded around an injured boy. The zen monk finds out that the boy was riding the new horse, fell off and broke his leg. The villagers shakes their heads, worried and tell him how terrible this is. He shrugs:
"we'll see..."
A few weeks later the monk returns to the village; this time there is great commotion...a war has broken out between the territories. All the male villagers must go and fight, except for the boy with the broken leg, which has not yet healed. 'Isn't it wonderful that he broke his leg...now his life has been spared', exclaim the villagers. The monk smiles and shrugs:
"we'll see..."
Posted by Martin Prihoda at 8:18 PM

Just want to say your photos are beautiful!

Man that's so weird, I heard that same story only the other day, I cannot remember where it was, it was on some video some where. Very philosophical.

Love your work and your ethos, I draw much inspiriation from it.

Good story, it definitely makes you think. Didn't know you have a blog, I just discovered it tonight. I'll be looking forward to reading your entries! Happy Blogging!

I heard a story about a village where a young child was ill, the village was poor, the local priest asked the villagers to help the child to a nearby town for medical treatment.

The village came together and collected money to pay for the child to go.

The village elder visited the priest he was a rich man and he gave a lot of money, whilst he was there a old woman extremely poor walked up slowly removed two coins from her pocket and gave one to the priest.

The priest then asked if the old woman would like to accompany the child to the town.

The wealthy man complained that he gave more money than the old woman and was really angry and bitter with the priest.

The priest looked up and asked the elder to calm down. The elder asked for justice and sense to prevail.

the priest explained that the old woman only had two coins to her name and gave one. She had in effect given half of her wealth more than anyone in the village.

The elder relented with the priests wisdom.

I love your philosphy and photography

Funny, I just read that story too, in "Buddhism Plain and Simple" by Steve Hagan. To me, it really demonstrates the nature of our suffering, our compulsion to attach and feel aversion to situations based upon our fixed ideas. A more contemporary example I read in one of Sylvia Boorstein's books... A couple is waiting on line at the airport, both faulting each other for being late, fighting. Sylvia wanted to say to them... you're so attached to making this plane. But, how do you know this plane will be the safe plane for you. Maybe you'll miss your plane, but it will crash. I would add, maybe you'll miss your plane but something otherwise good will happen as a result...The more we see possibilities, the less we will suffer.

Thanks muchas for posting this!! I was planning on using it as a theme in a yoga class, but couldn't recall the details of the story (just the premise, which I live by). Googled "monk story we'll see" and your post was listed first! Thanks tons.