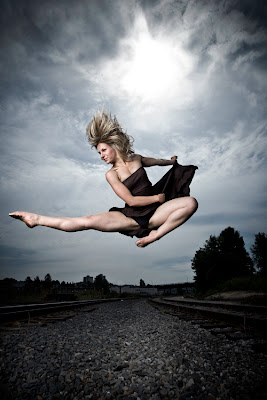 I categorize my photography career into two distinct periods; ‘before’ learning how to use off camera lighting and ‘after.’
There's not much point talking about the 'before' part
I had enrolled in an advanced lighting course at a local college because I felt I had reached a plateau; my work had been getting stale and I desperately wanted to grow, to advance and learn. I had photographed every conceivable object under the sun at the widest aperture I could and my portfolio was beginning to look like I was obsessed with bokeh.
I was curious about how all those amazing Annie Liebowitz photos for Vanity were achieved. I was in love with her cinematic lighting and her ability to infuse drama in to her photographs. So I took a lighting course.
Much of the course was indoors; we learned how to use strobes, how shoot against a backdrop. I learned theory backed up with practical lighting scenarios…but somehow I felt that there was still something ‘missing.’
The came the fateful day; I remember it clearly. It was a cold, crisp, wintery blue sky with a spattering of puffy convective clouds spreading out over my hometown of Vancouver. Today was the day we were going to take the strobes outdoors and ‘balance’ light; essentially mixing strobe light with ambient sunlight to create an image. I had no idea what to expect.
We set up the light, a beauty dish, above the subject and the setting 3 o’clock winter sun directly behind her. We metered the ambient and metered the strobe and then came my turn to shoot…
What happened next was perhaps the biggest milestone in my career. I depressed the shutter, I heard a pop and a moment later an image appeared on my little 30d LCD.
I gasped. This was it! This is exactly what I had been looking for! It had that same drama, that same cinematic feel. The clouds in the background were underexposed, making them appear stormy, dangerous, dramatic and the model, illuminated by a perfectly balanced strobe light, her dress flaring in movement, her expression poised…it was perfect. She looked like a goddess, a Cleopatra set against an epic backdrop.
I never went back, I couldn’t, nothing was the same after that. I had done it and it was all I wanted to do…
Of course since then there’s been a lot of refining and tuning, but essentially that type of lighting is the driving force behind much of my photography and the workshops I teach. Photography is like being a singer, you have to find your voice, you need to refine it, to differentiate it. Only then will your work be recognizable.
Posted by Martin Prihoda at 7:22 PM

Great post Martin. I'm a young student saving up for a speedlight kit and it's articles like this that get me excited about whats to come! I've been big fan of you're work since coming across you're interview on the LightSource Podcast. Always nice to see another BC Photographer doing so well!

I am one of those who follow your posts very closely.

I visit your blog and web every now and then and they always inspire me.

I was recently in Hampi, standing next to the eerie looking tree where you had shot Smita Lasrado. I was amazed by your composition and neat execution.

Request you to conduct a workshop in Delhi/Bombay.

Am a big fan of your work. Keep sharing.

This post hit the spot! I just found about your blog via twitter/via Bert Stephani. I used to do mostly studio work and just recently have decided to use speedlights outdoors. I've just started poking around your other blog posts and your work is inspiring and incredibly creative!You have an amazing talent and after seeing your images, it stirs up my photographic imagination! I'm now a fan!

yes, this post really sums up the root of creative expression and what drives artists to keep moving forward. it would be interesting to read of other photographer's stories of what their 'eureka' moment was.

Martin, thanks for sharing this. I have always wondered how such transformation occurs & you have briefed it perfectly. Am hoping I will do it one day too. Vancouver was pretty cold last week. Am in India now for a months vacation. Cheers.

Great post Martin - geat photo technique, of course. Regrettfully, for now at -20C, I'm kinda stuck shooting in the studio against backgrounds. Ottawa ain't Vancouver. But the sun WILL come.

Fab, Martin! I'll be checking out your blog frequently from now on.
I'm in that 'before' space at present, wondering whether I'll get that special moment that will justify the cost of a week-long lighting workshop out of town. That's an amateur speaking for you.
You're tipping the scale toward the workshop...

Hey Martin, Just found your work through a link posted on strobist blog, and I have to say this particular post really inspired me and I happened to identify with.
keep up the excellent work and inspiration.

Sorry if this seems like a tacky question, but I'm wondering if you can tell me which lighting course you're referring to? I live in Victoria and have been searching for that same kind of revelatory experience, so would love to check out the same program if you recommend it. Thx.

Just finished reading through your blog from beginning to end.

Inspiring... there are other words I could use here, but I'll stick with 'inspiring' for now.

Your ad shot for Fastrack posted Nov 24/09 is amazing. I would very much like to see a BTS of that one!

@Shanna ... it sounds like the Advanced Lighting course at Langara College, not sure if Greg Blue is still the instructor? Everything Martin was saying in the beginning about diffused highlights and shadow transfer area is the kind of excellent technical detail you'll get from that course.

I followed David Hobby's link over to your site. Excellent work here. I too have been loving to bring lights on my outdoor work. Every time I head it seems I'm trying something new. You're doing wonderful work here. I'll be checking in to see your new posts.

Thanks Doug! I'll definitely check out the Langara course.

love your wrk, and still trying to learn about the techniques you use.From Nepal and would love to meet you anytime you decide to drop by and explore nepal.

This is a very familiar story Martin, right down to the 30D.